when i grow old, i want to be like steven tyler

He's flamboyant. Sexy. Loud. Does his thing and does not care one bit about what the world thinks. Crazy. He's beyond Sixty! I am not a fan of Aerosmith until I was coerced to watch their concert last Wednesday with a rock music super fanatic. The tickets were bought right after the announcement of the coming of Steven Tyler and his gang in the tropics and I had more than a month to memorize the songs' lyrics (because it sucks to watch a concert where you cannot sing along!). I regret not having done so (memorize the lyrics, that is) because the concert was AMAZING!!! I compensated my Aerosmith-illiteracy with my screams and energy-bunny jumps until the very end of the show.
And then I decided, when I grow old, I want to be like Steven Tyler. So Alive! So colorful! And the cherry on top bonus of having found that one thing he likes to do most in the world and is lauded and praised and idolized in the process.
Quick Fun Fan Fact:
Alan pointed out that one of his trademarks aside from his sexy screams is the tying of scarves on his microphone stand. Vogue Vibes shares the story behind this: He is also famous for the scarves hanging from his microphone during his performances. According to Tyler in an interview with Blender Magazine, it started as an accident. “Very early on,” he tells Blender, “I had a favorite macramé shirt that I wore onstage all the time and an Indian scarf in my hair” – trés dude looks like a lady. “The shirt and scarf got worn out and torn off me eventually,” he says, but rather than throw them out, Tyler “hung them on the mic-stand for good luck. Must be the gypsy in me.” The look stuck, and its now one of his trademarks 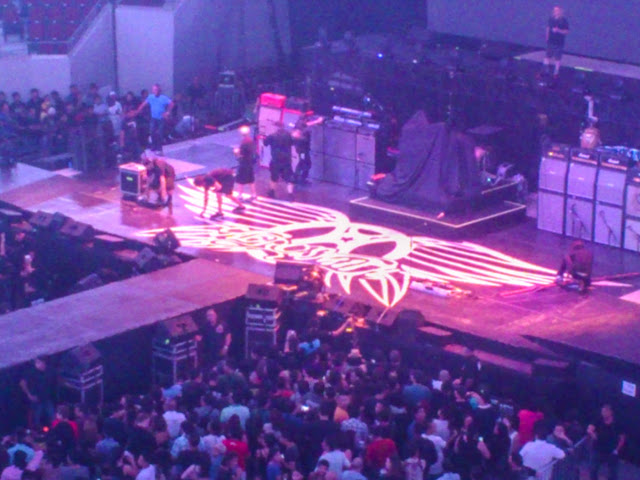 We were perched high up the Upper Box section and did not have a camera (more like the security made us leave the camera with them because it is not allowed, darn) so please make do with the gritty pictures. :p Right after the RIVERMAYA front act (which will never be the same again without Rico Blanco and Bamboo), boys in black rolled on the stage floor the Aerosmith insignia. The crown went wild!! Insignia pa lang yan ha! 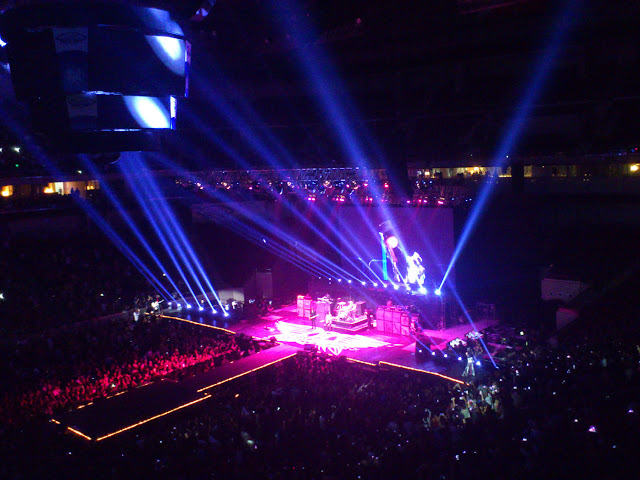 The concert venue lights dimmed, the stage spot lights were turned on, and then Steven Tyler gyrated, teased and flirted with the crowd non-stop until near midnight. He is tirelessly wonderful and unapologetically over the top. (His were the words, "if it is worth doing, it is worth overdoing.") The crowd loved him. I LOVE HIM! Of the 20 songs he sang, I only knew two (I Don't Wanna Miss a Thing and Come Together) and danced and jumped myself crazy all through the other 18 songs (with short pauses of catching my breath and brief sitting on the bleachers).

Aerosmith Manila Concert Song Line Up:
Love In An Elevator| Draw the Line| Jaded| Oh Yeah| Cryin'| Last Child| Janie's Got a Gun| Livin' on the Edge| (then solo part of the drummer - this is among the highlights for me!)| Rag Doll| Stop Messin' Around| I Don't Wanna Miss a Thing| No More No More| What it Takes| Come Together| Dude Looks Like a Lady| Mother Popcorn| Walk this Way| Dream On| Sweet Emotion 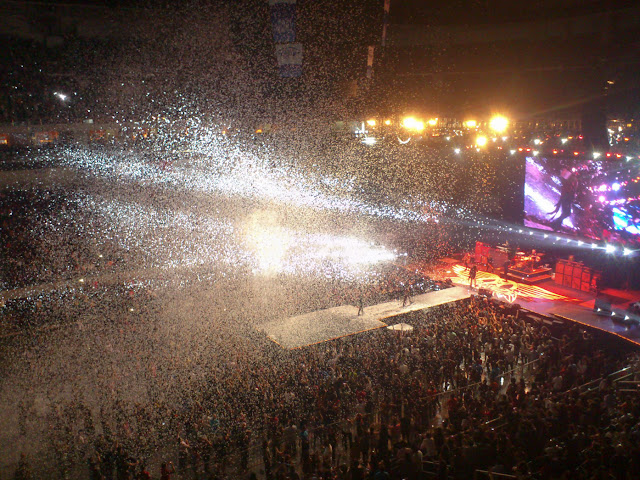 A shower of confetti after the finale!

To a fabulous life like Steven Tyler's!
Posted by tinabax at 12:55 AM