I hope to write about interesting people I meet. This has been my plan since forever but I only have done it once and it's in fact one of the favorite subjects I've ever written. This was originally posted in my multiply account which I now rarely use.

Also, since I do not have a picture of Harry (the one I used in my old blog I can't export, yikes, low tech talaga ako) I'm posting mine (vain!) taken on the same night (christmas party) of my Harry encounter. 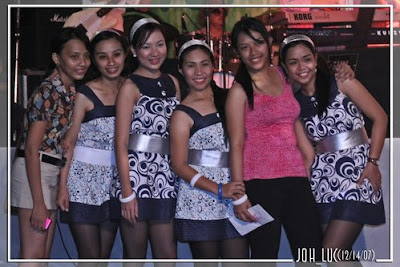 
There was shuttle #32, shuttle #33 – then shuttle #40. Then #36. But our shuttle assignment was shuttle #34 and we found it at the tail of a long line of more or less 50 shuttles. All throughout the hunt, I was tugging my brown miniskirt, lugging some three pound-heavy backpack and desperately covering the length of my legs (naks!) with a supersize Watson’s plastic bag. But I wasn’t complaining. I was with Harry.

I gave him an awkward smile and let out a timid “hehe”. He offered to carry my things which I politely refused. He insisted. I gave in. My things were really heavy. And being the gentleman that he is, he gave me his shirt so I can wrap it around my waist. Hay!

When at last we found our FX-shuttle (damn it! Haha!), I suggested we sit in the back so we can make use of the space for my things. I struggled to lift my legs (and keep my butt from showing) to get in the car – I never realized miniskirts can be so binding. He assured me he will look the other way and even coaxed our driver to do the same. “O kuya, dun sa kabila tayo titingin ha!”, he said, as if enjoying my girly ordeal.

There were only three passengers. Me. Him. And that unremarkable third person who was dropped off just three blocks away from the venue of our company’s Christmas party. I had Harry all to myself for the majority of the trip. Merry Christmas to me! I feigned fatigue and sleepiness but I could not resist the urge of observing him really closely. He sang along with “We’re the king and queen of hearts…hmmmmm” playing in the background. “Pang Prom no?”, he said. “Oo nga” was all I could reply. Lame. Really Lame.

He was enjoying the song so much that he even played with an imaginary drum set. Cute. He showed me his disco ball necklace and congratulated my group for having placed second in the dance competition. I congratulated his group for being the FIRST. His Michael Jackson moves which had all the FLI girls shrieking and screaming replayed in my thoughts. He said it was a last – minute choreography and he’s ecstatic it worked out well.

I have a fuzzy recollection of what we did or talked about but a few minutes before I got dropped off our East Avenue apartment came the kind of conversation which sets Harry apart from the rest.

“Diyan kami nagba-badminton”, he said, gesturing outside the translucent FX-window from where I vaguely saw a medium-rise building with what seemed like blinking lights. I nodded even if I wasn’t sure I got his badminton-building right and told him I am unfamiliar with the place. He was genuinely surprised.

I can not give justice to how spontaneously he revealed God, how he talked about Him with so much enthusiasm even after a physically-draining and super-fun party which had all with youthful vibe thumping and grinding with the 80’s music and having their generous fill of booze. Harry’s version of a post-party celebration is different. That is his magic. He is not afraid to be branded as, I don’t know, what do you call someone who openly talks about God, initiates conversation about Him, whenever, wherever anyway?

I remember one instance in the UP sunken garden when a bible-carrying, eyeglasses-wearing, curly-haired girl walked up to me and rattled off bible passages and Divine lectures. I got turned off then afraid and all I did was say sorry then I walked away. Harry’s approach is effortless and natural – and his charms make him all the more tolerable.

I regretfully cut short his homily as I had to give our driver directions to my place. The ride was really bitin. For him, maybe he was not able to share enough. For me, maybe I have not heard enough.

We exchanged goodbyes, goodnight’s and ingat’s. He moved to the front seat to keep manong driver company. I was kind of hoping to meet his eyes before I completely turn my back and lock our gate. But when I looked back I saw him smiling and shaking the hands of our driver, looking eager to share more of his stories. I hope manong driver enjoyed and more so appreciated his company. The same way I did.
Posted by tinabax at 8:17 AM