Angelina Jolie is the reason I want to be famous. It does not have anything to do with Brad Pitt. It's her superstardom used to make a difference in the world which kills me with envy.

Just last week, I read about her traveling to Ecuador strutting her stuff as the UN Goodwill Ambassador.UN would not even give me a second (not even a first glance).

Or maybe I am just making excuses from strutting my stuff as an ordinary citizen. After all, as my grade school teacher insists, we can make the world a better place in our own little way. Barack Obama seconded, borrowing Gandhi's line, that WE can be the change we want the world to see. The Milo advertisement, however, has nailed it many years ago and from it I take comfort: Great things start from small beginnings. Great excuses for being ordinary.

Two days after the Philippine Independence Day celebration, on my 12-hour ride from Cagayan to Manila and fresh from my very brief stint of being unemployed, thus this much-in-need-of-my-self-esteem blog entry, I came across this write-up which I read everytime I feel so common:

Angelina Jolie is the reason I STILL want to be famous. It's does not have anything to do with her superstardom. It's Brad Pitt's six pack abs she sees everyday which kills me with envy. 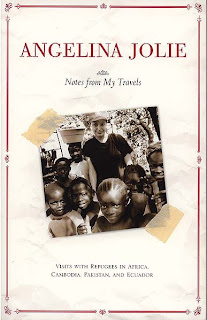 I found a deep sense of appreciation to this actress' sexiness through her book, Notes from My Travels.